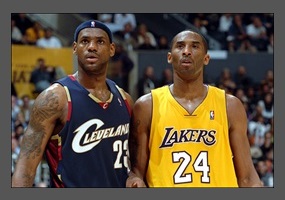 So my first post  that is all about me complaining and ranting.

As some of you know, I am not a fan of Lebron James. I am a huge Kobe fan.  So obviously this post is going to be biased.

Since I have some time to kill (it’s raining like mad in Hong Kong), going to do some comparison.

Simply put, as MJ says its 5 is better than 1.  Don’t argue with his airness.

In the beginning he says Lebron is more dominant. Well I mean physically and age wise Lebron definitely has an advantage over Kobe (kobe is 34 now).  But the competitiveness of Kobe Bryant far surpasses Lebron in my opinion.

Kobe is just way more mentally tough than Lebron.  Kobe wants the ball.  He wants to take over games.  It doesn’t matter if he misses 10 shots in a row, he still wants to take the last shot.  Ya ball hog you can say.  But the man is a beast.  Did you see that game against the raptors 2 weeks ago?  Seriously.

Versus the game today against the bulls.  All i see is Lebron fouling people and complaining.  Yea I am anti lebron lol.

Another reason Kobe is better than Lebron, is because Kobe plays like MJ and Lebron plays like Magic Johnson.

I think we all agree, that Jordan > Johnson, although Magic is a great player.  But I think if we were to choose fantasy teams we all take jordan first. Right?

Well the following video shows how Magic believes Lebron is like him, and Kobe plays like Michael.

And if you don’t believe me, watch this video:

KD is one of the top players in the game.  He’s played against both players.  He knows. He knows.

Don’t get me wrong.  Lebron is a great player. But he’s never going to be as good as kobe in my opinion.  Yes Kobe got help over his career (Shaq, Nash, Howard).  But Kobe never left LA to go to another team.  Not like Lebron. In my books, Miami is always D Wade’s team.  Not lebron.  I would have had more respect for him if he stayed in Cleveland, and got people to go to him instead.

Yup! Anyways, start of a 4 day holiday..gonna be fun!