One of my favorite things to do in the middle east is going to the desert.

You just don’t get to experience that much else where (HK, Toronto etc). So yeah you can say it’s unique and I definitely recommend everyone to go at least once in their life time. Go play in the sand yo!

We were in Dubai for a work trip, which meant that a trip to the Red Dunes Desert was in the books. For sure yo! But like a dumb ass that I am I didn’t read the itinerary because I am a lazy asshole. So I had no idea what was in store for me…. 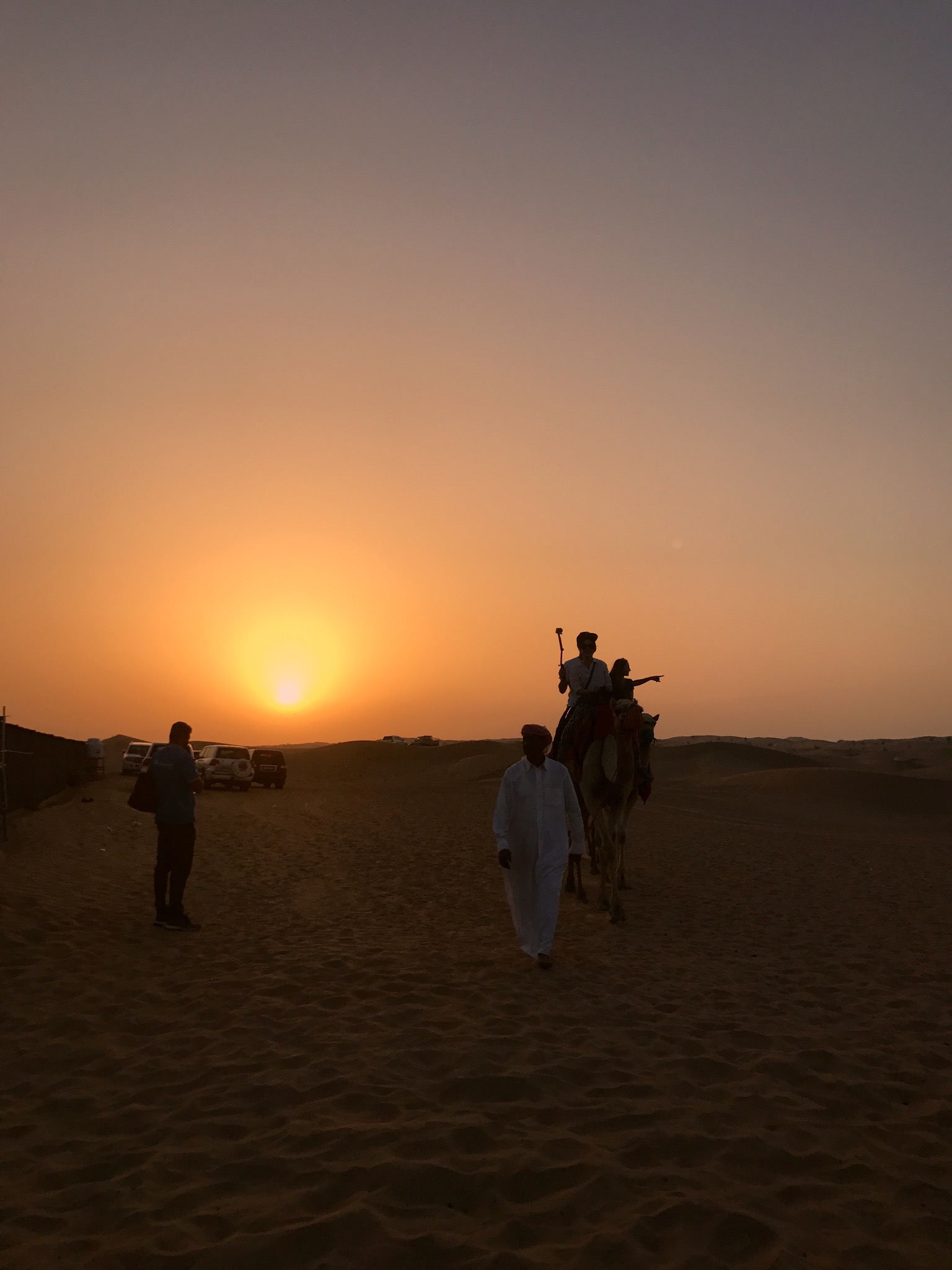 Side note -> There are a lot of tours in Dubai that will take you to the Red Dunes Desert but the one we chose was OceanAir Travels.  Okay I lied, I didn’t choose it, le Life Boss chose it and as always she chose the best tour for us. Friendly driver, cost efficient (I think?) with enough activities to keep you occupied for the whole day. 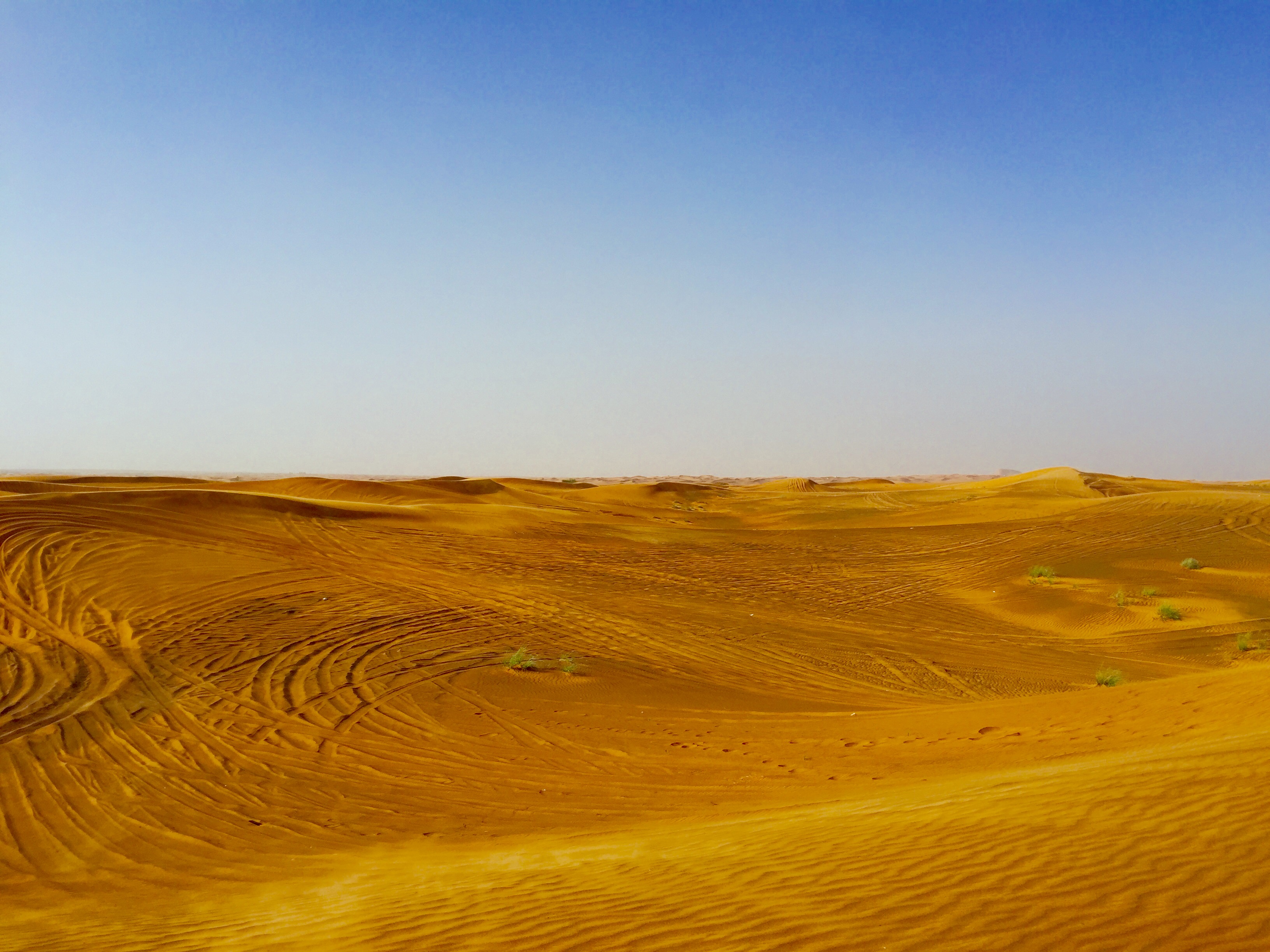 I know. We cheap as f*ckkkkkkk.

Got to the desert, took some photos. Was nice, but must say not as nice as my experience in Riyadh. But I shouldn’t complain. In Riyadh I had a local take me to the desert.

But yeah..it was a bit commercialized here but hey what are you going to do about it these people need to make money. Money money. 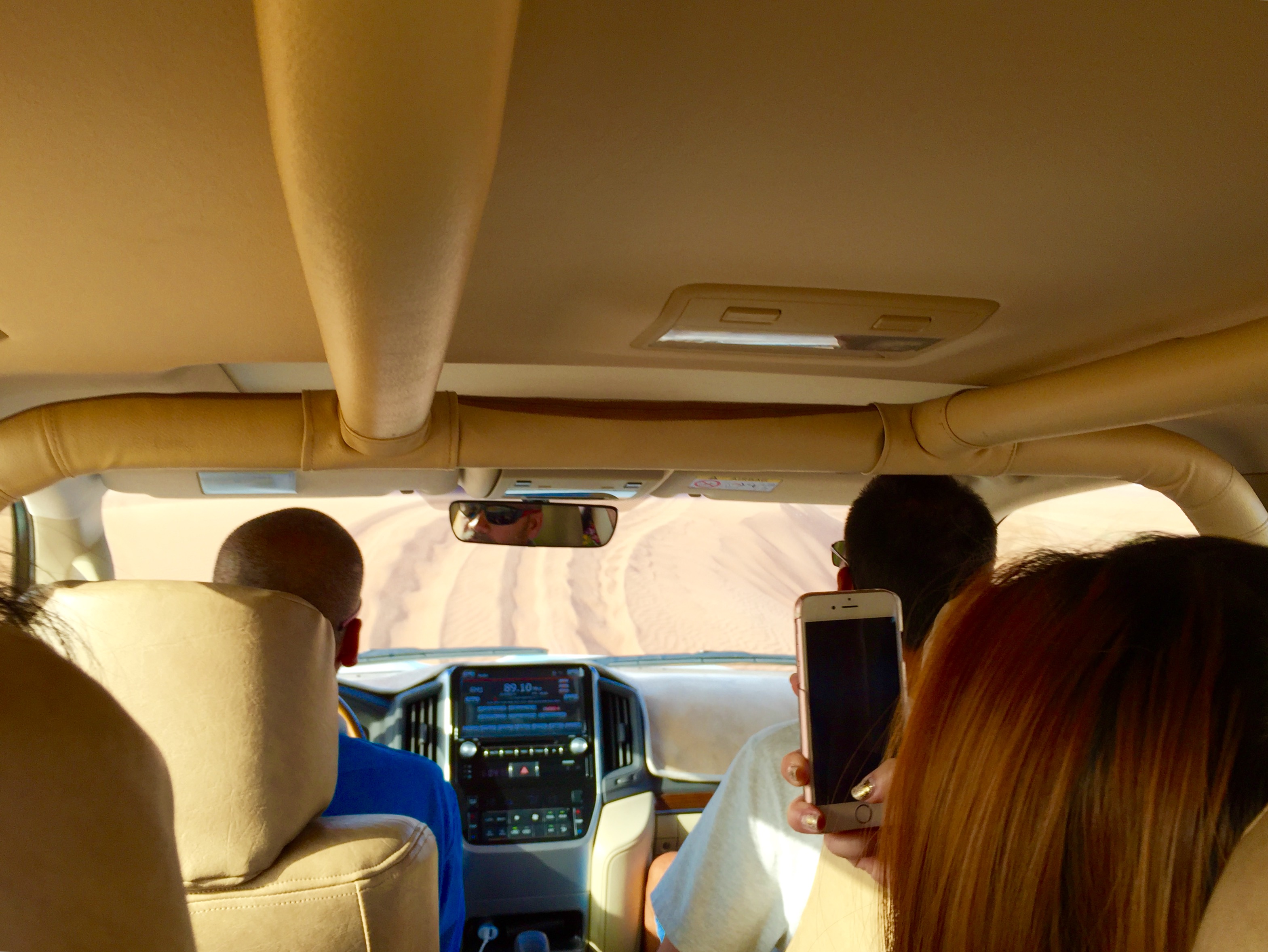 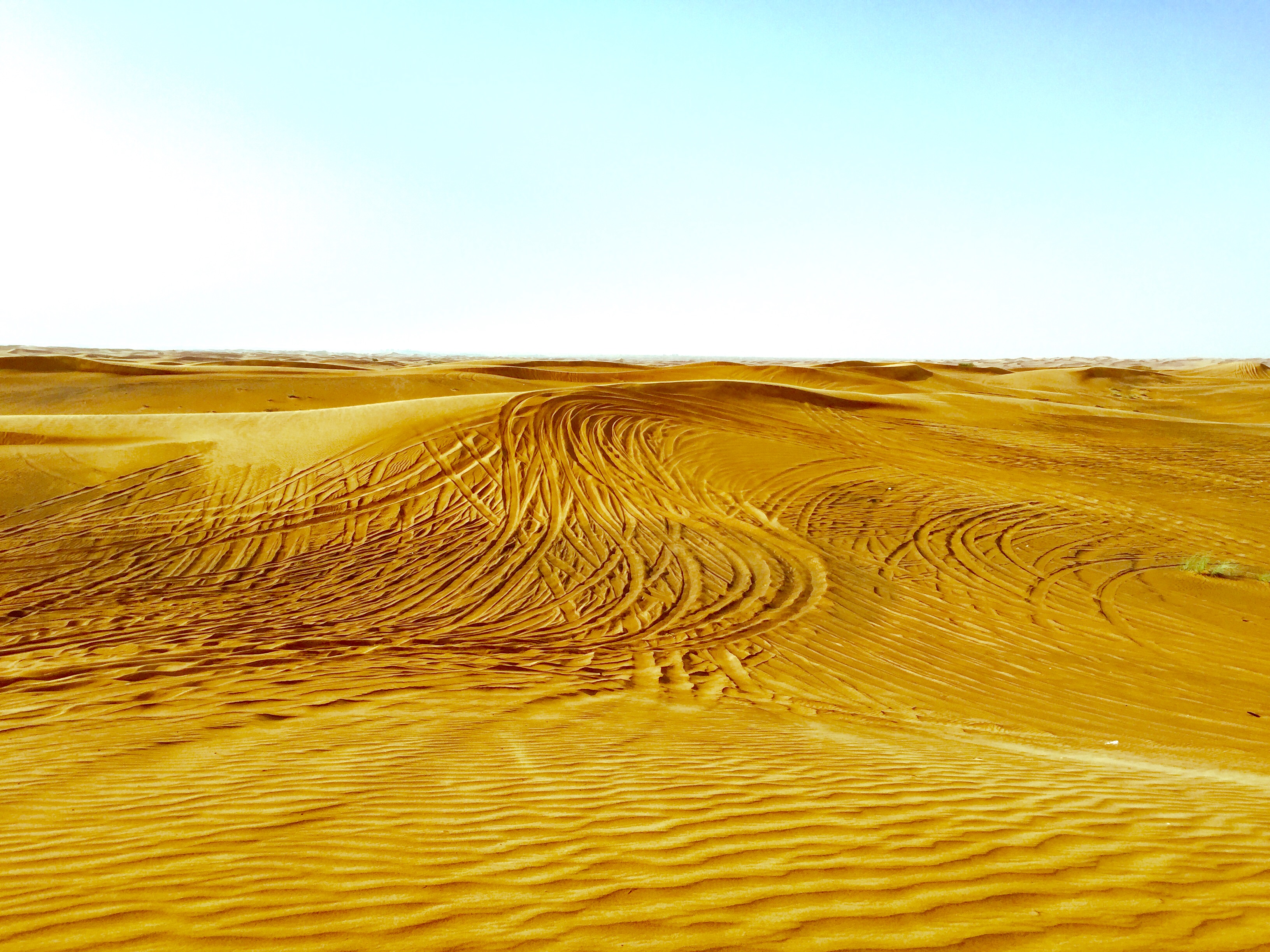 After taking photos we got back in the car.

The driver then proceeded to drive very slowly, very safe.

Wait. Hold up. There’s a cliff. Why the hell is he going off the cliff.

Dune bashing is a form of off-roading on sand dunes. A Large sport utility vehicle such as the Toyota Land Cruiser is an example of vehicle used (however, light weight vehicles often fare better in the extremely soft sand found on sand dunes).

Basically, we were on a roller coaster for 30 minutes going up and down the dunes.  Feel like we were going to fall to our deaths. Did I even sign a waiver form to let them do this shit to me?

And here’s a tip, don’t be a stupid ass by eating a large meal before the bashing begins. Because you will get bashed like crazy aka throw up like no tomorrow because this shit is not for the weak.

And the one we went to was the “baby dune bashing” option? What? That’s baby?

I don’t know if I would survive the adult bashing… 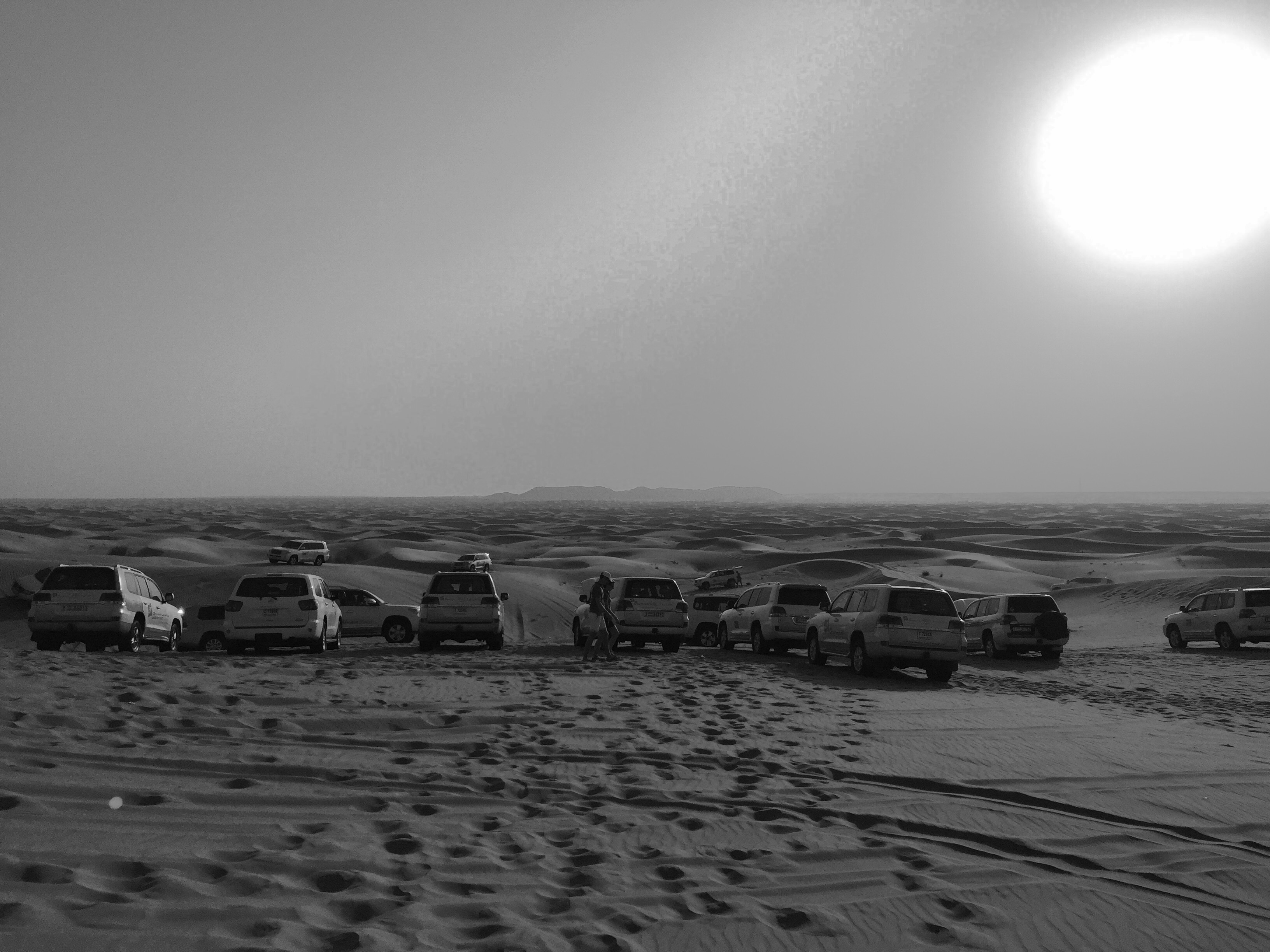 After being bashed by the dunes we finally arrive at our second location. All the SUVs were parked in one area and I thought this picture of that scene is pretty sick. Plus filters of course.

Damn I am getting really artistic.

Didn’t take much pictures of this area because it’s just more sand and desert. See my video later if you want to see me fall on my fatass while sand boarding.

Oh yes I said sand boarding. It’s like snow boarding. But on sand.

Back in the car we go and you know what was next? 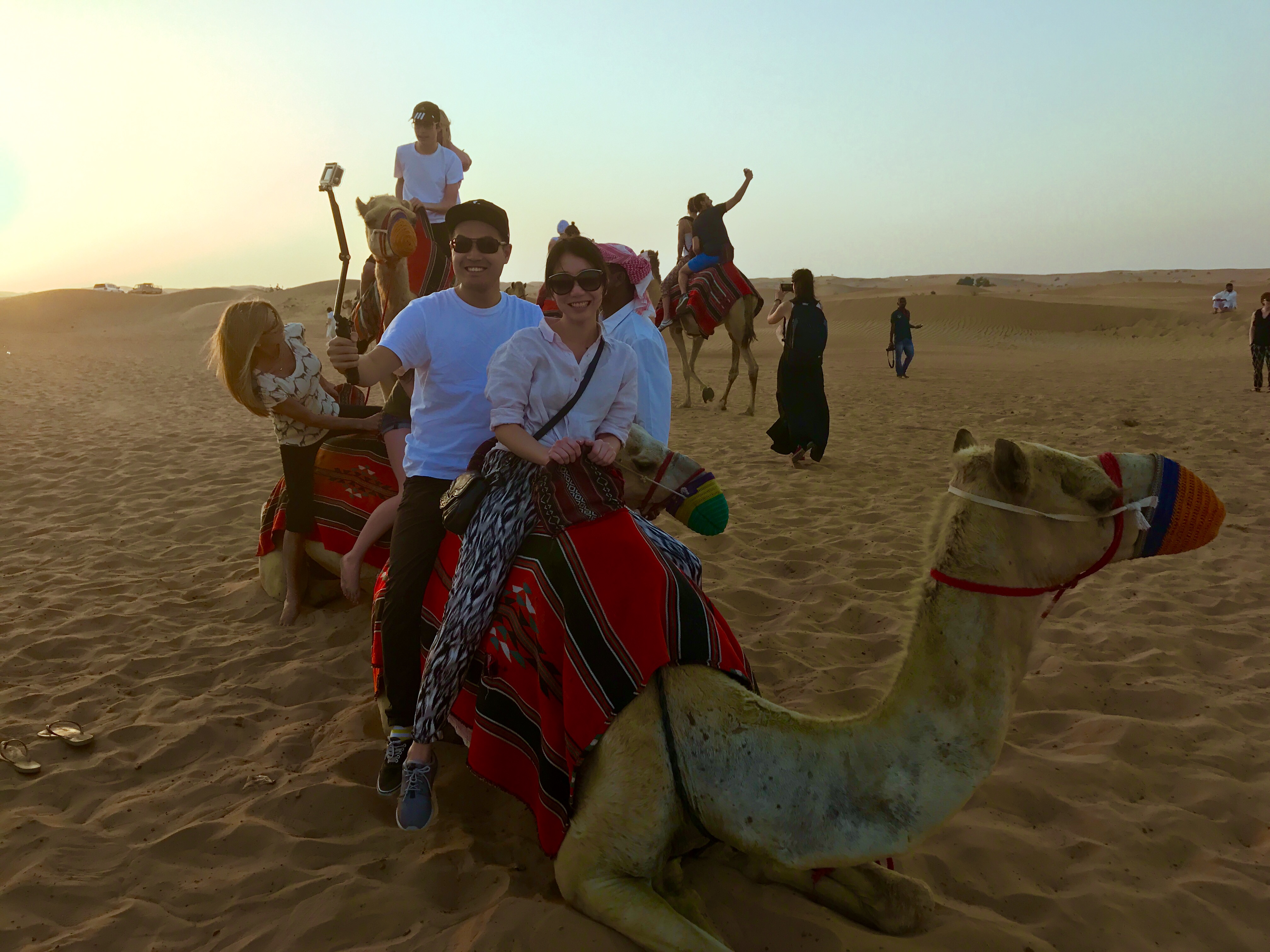 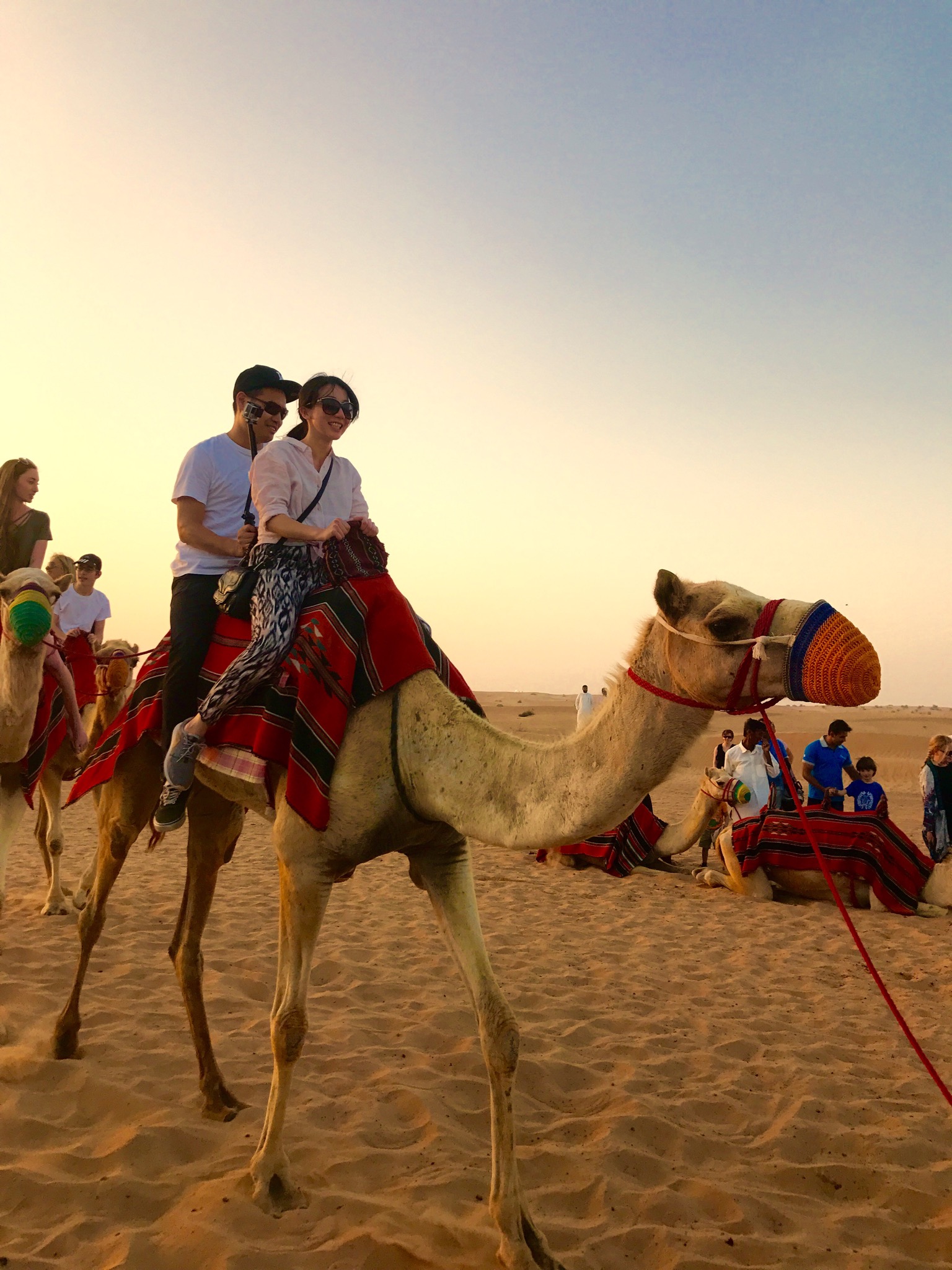 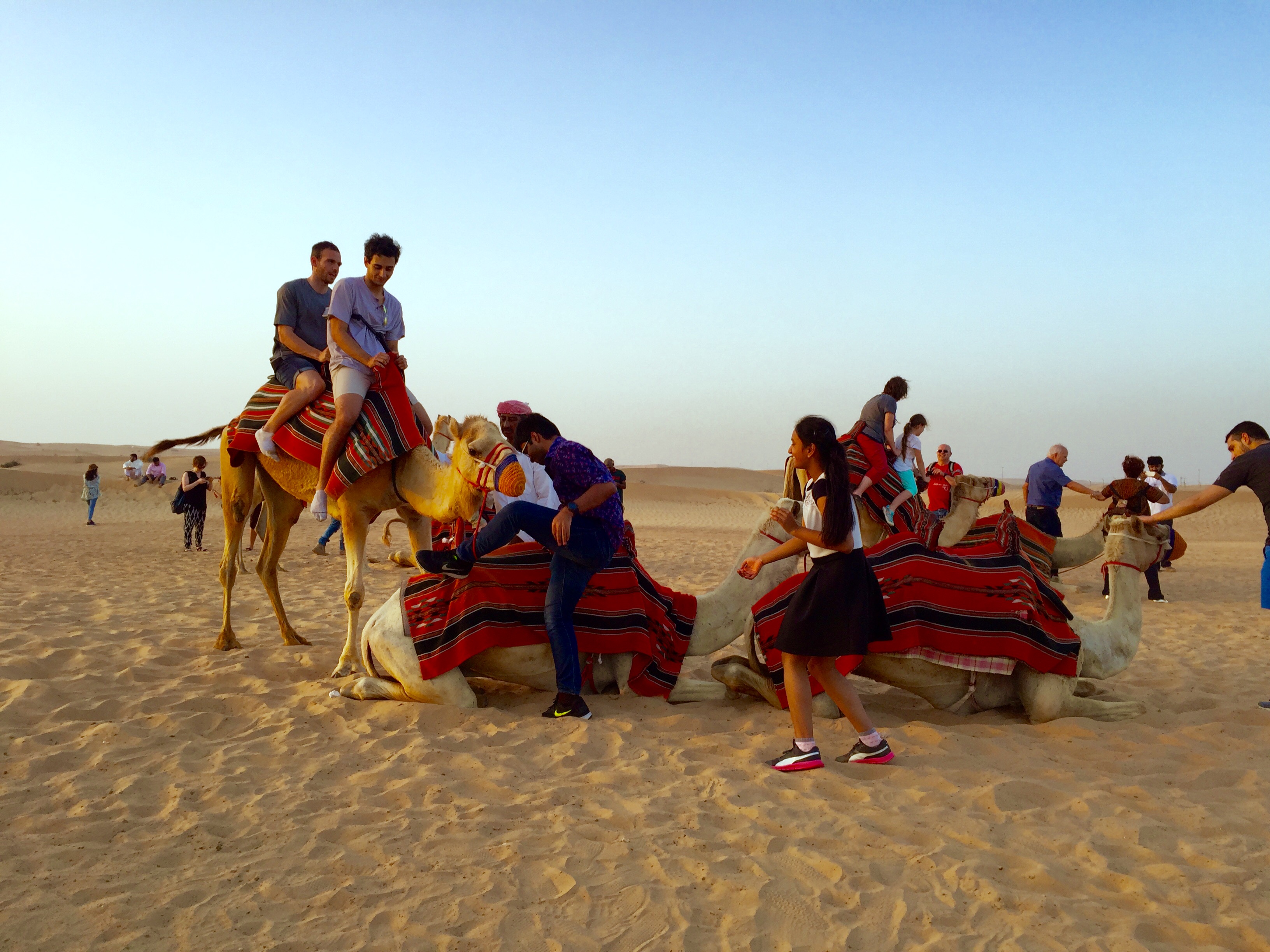 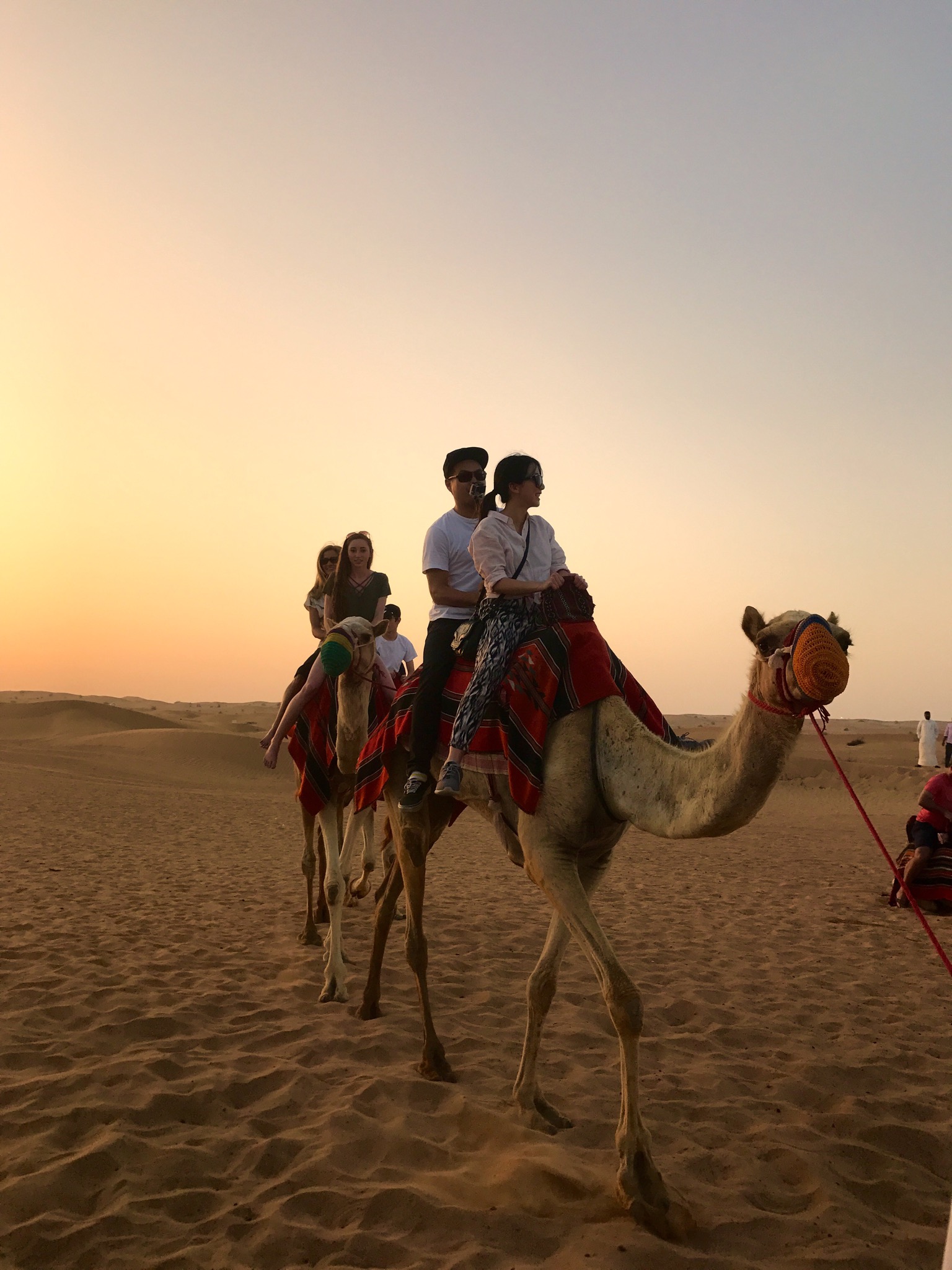 Super fun albeit very short (like 10 minutes). Felt kind of bad for the camels though, they were lugging the entire tour around one by one.

So I am sorry camel, I do feel bad.

My balls were also hurting really bad, for your information. 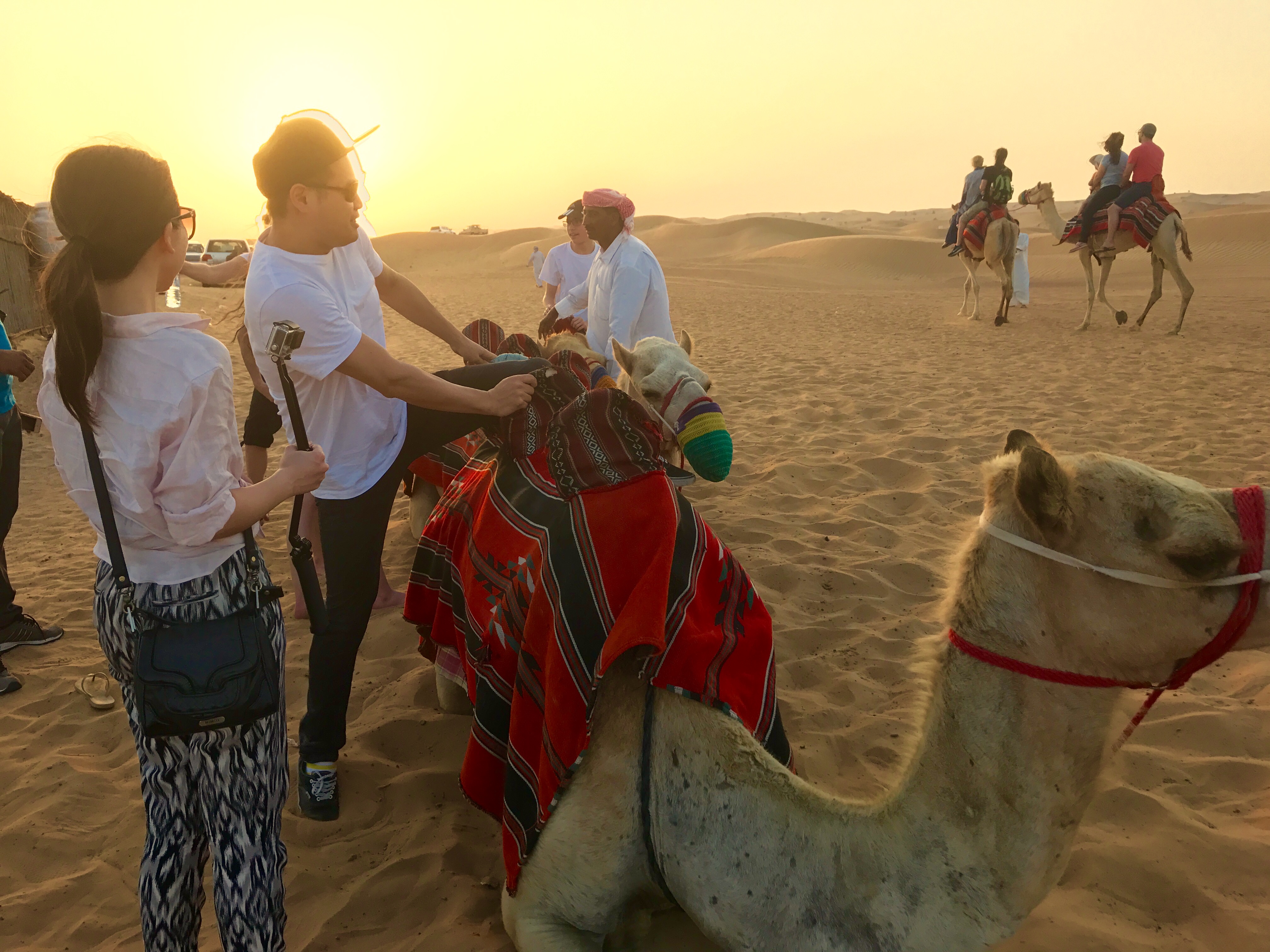 Here’s my fat ass trying to get on. It was a struggle.
Actually it wasn’t really me being fat that was the problem. It was more my inability to stretch my legs over the camel that was issue. I have been trying to do more yoga so hopefully I can touch my head with my big toe some point in the future. 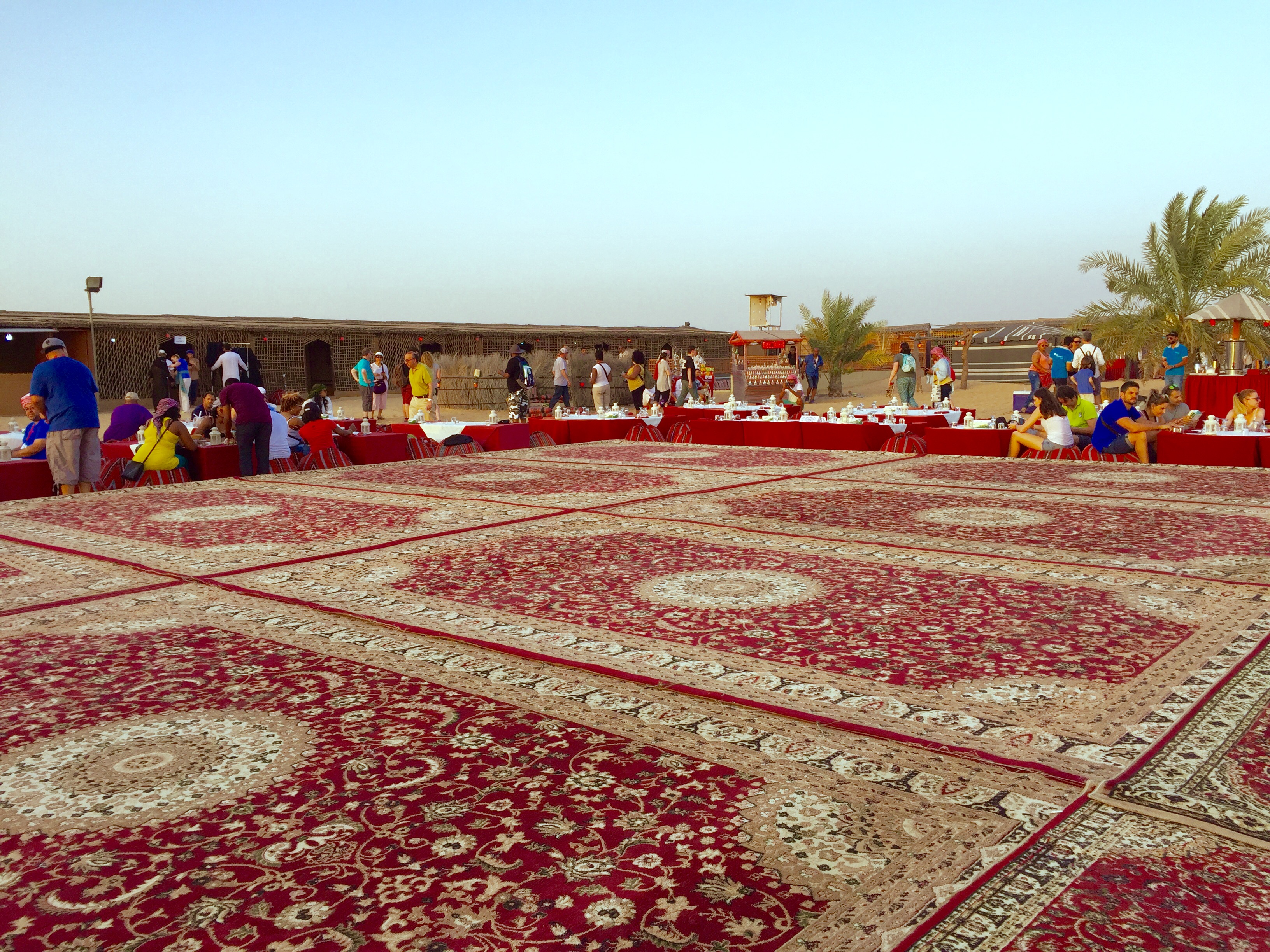 Our final destination was a campsite in the middle of nowhere. Look at that impressive carpet. Pretty sure it’s bigger than my flat in HK. I like carpets. I should get one. But I don’t like to maintain it.

Plus it’s too expensive. So screw it. 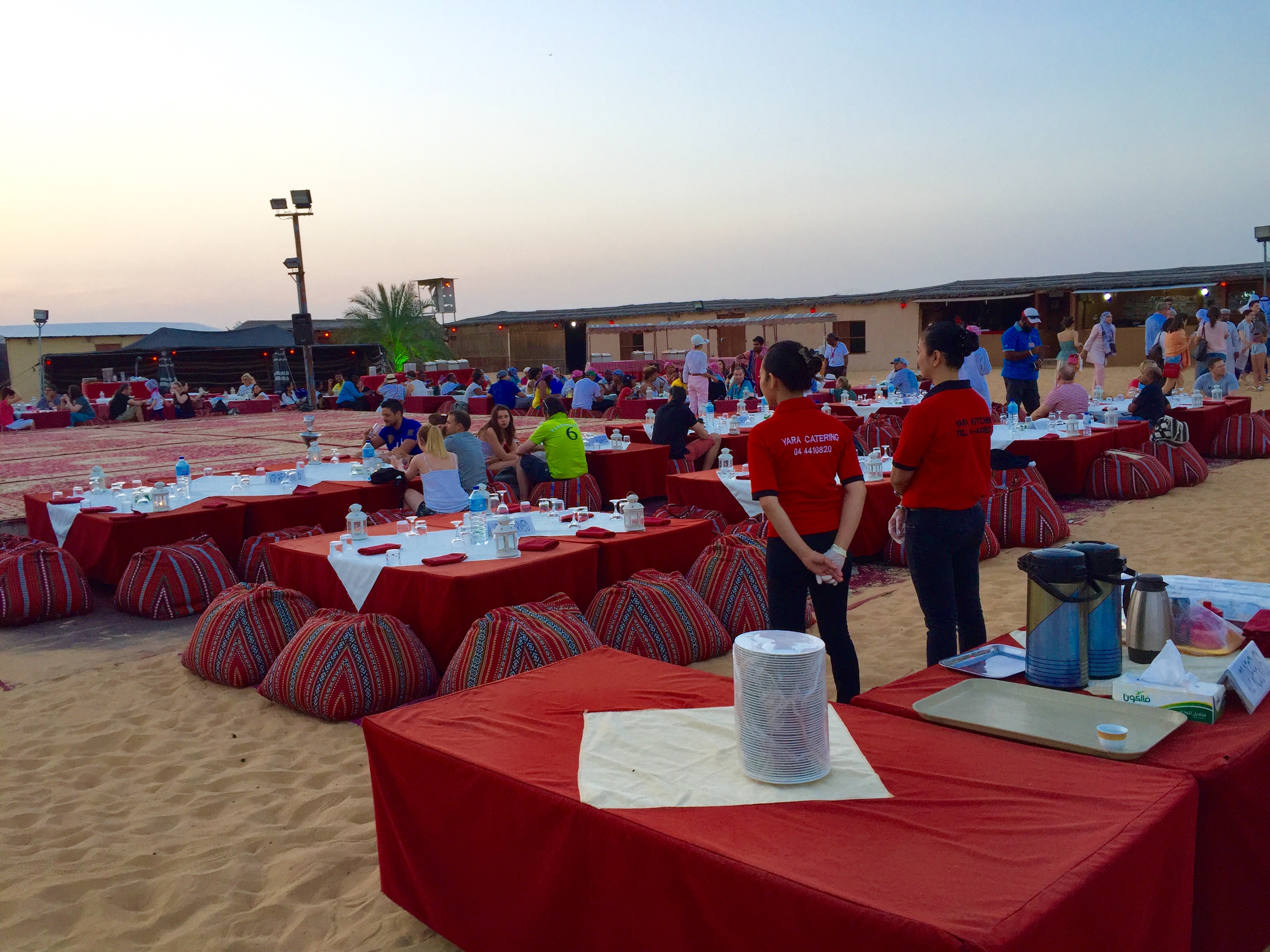 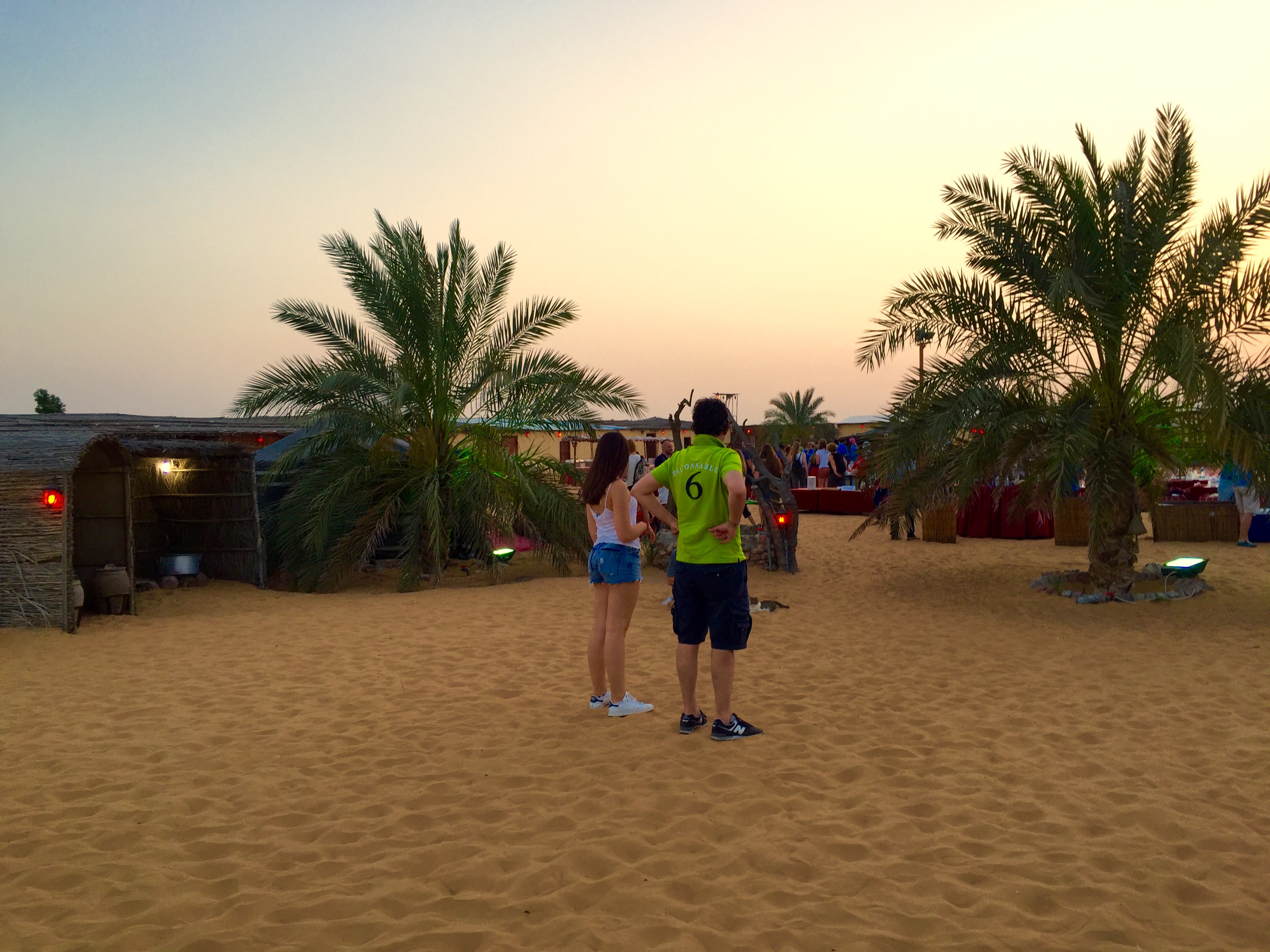 Was walking around the camp site and saw this couple looking at something on the ground.

What’s so interesting with sand? Never seen it before? 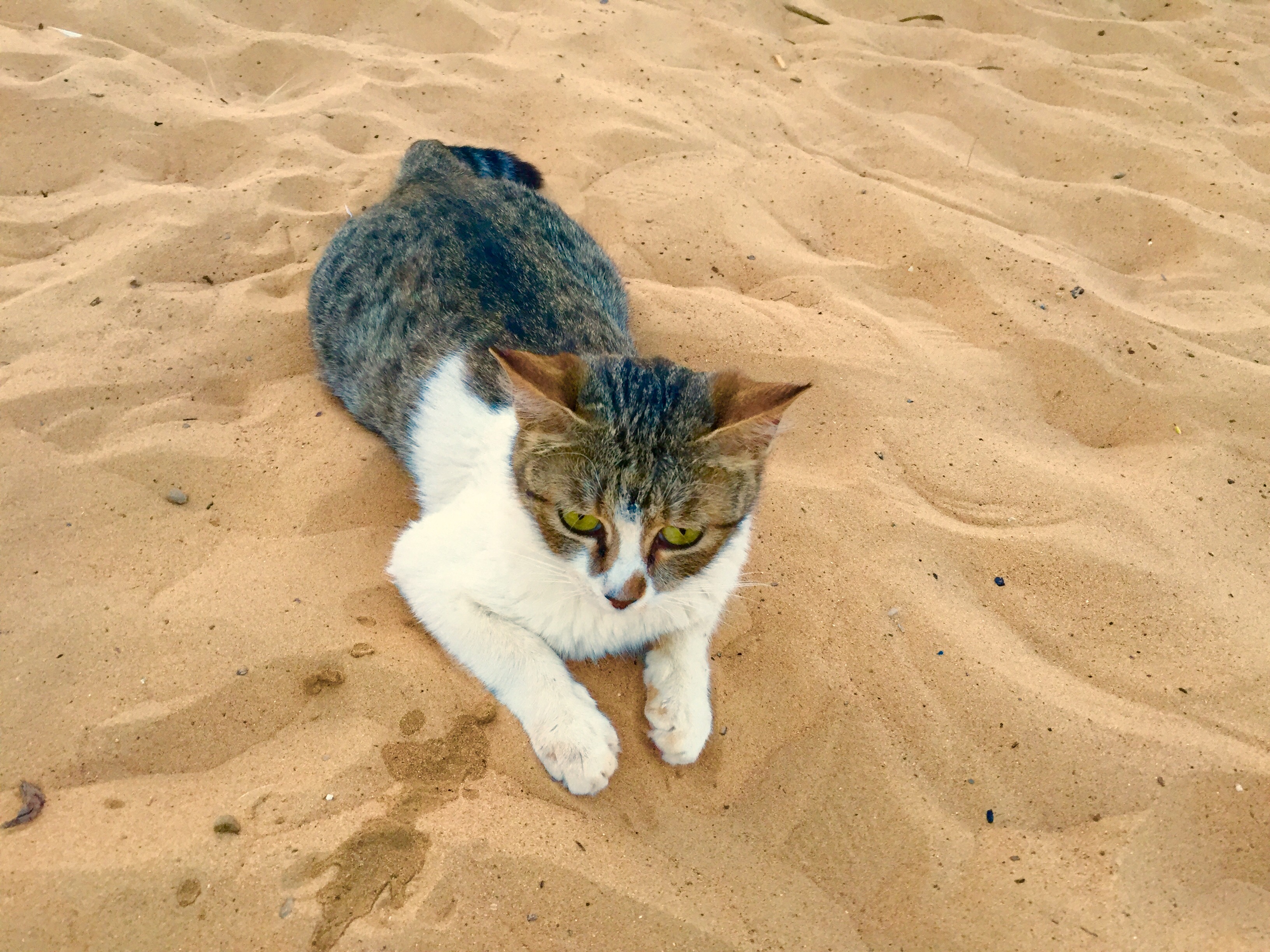 Ah I see now why.

Yes I also begun to stare at the ground (i.e. cat) for 15 minutes. Love cats. Miss my Brady. Sigh. 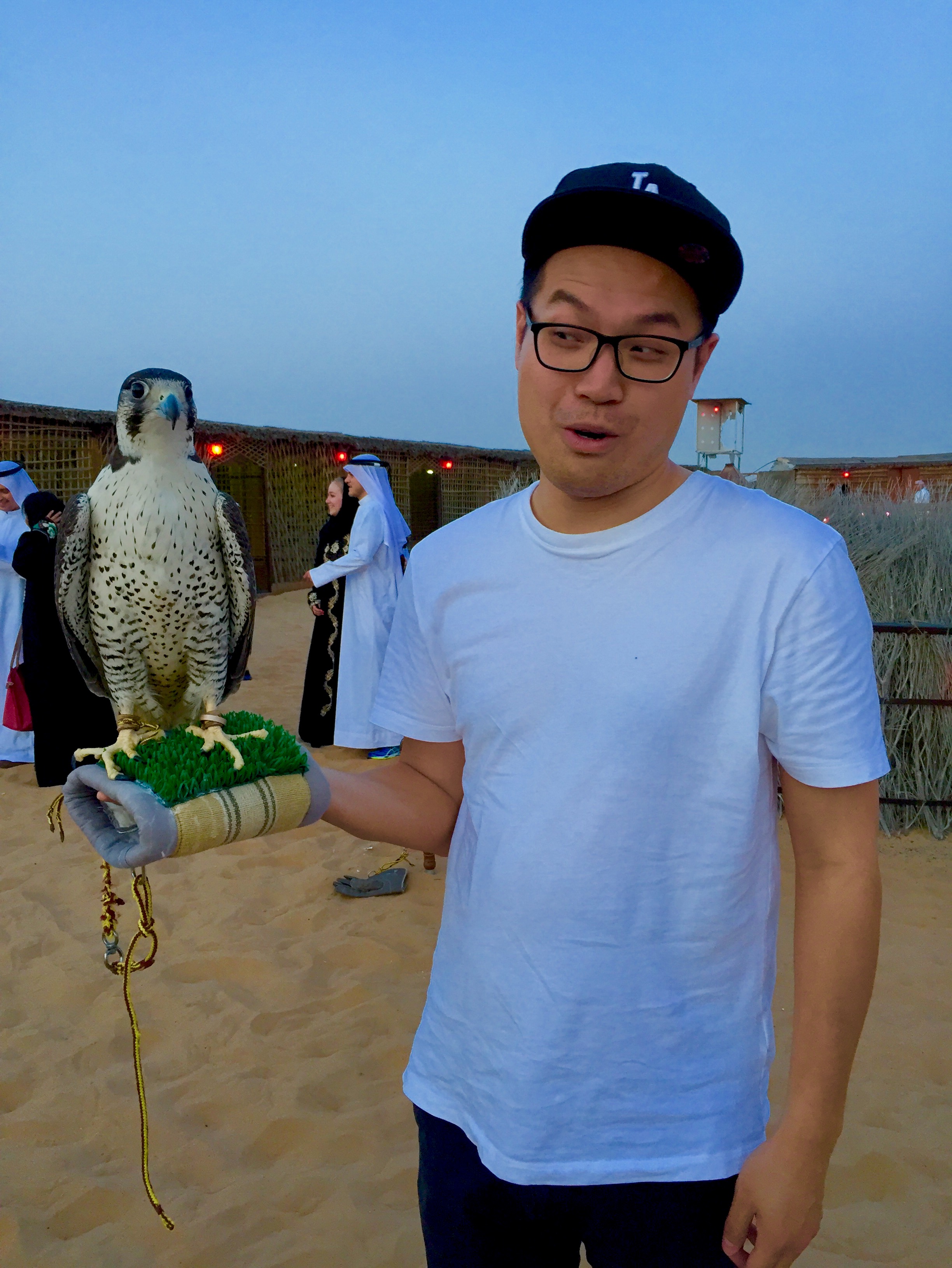 There was a lot to do at the camp site. Including holding falcons. Yo look at those eyes.

Scary looking birds. They could have taken my eye ball out if they wanted to. Scary ass birds. 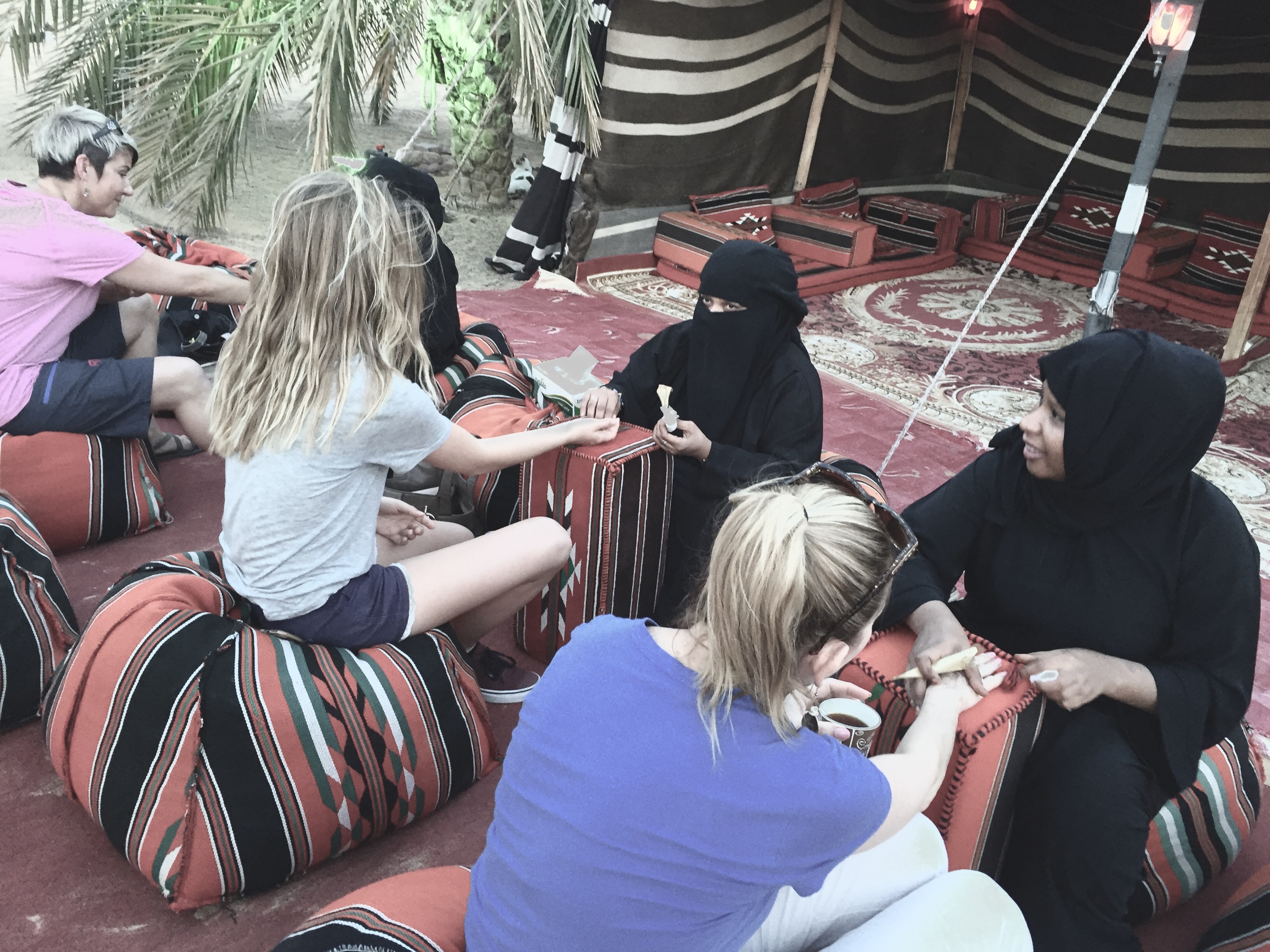 Can also get Henna on your hands. I didn’t get one but seemed to be a big hit with the girls.

Then I walked over to the other side and started picking out my clothes….what?? 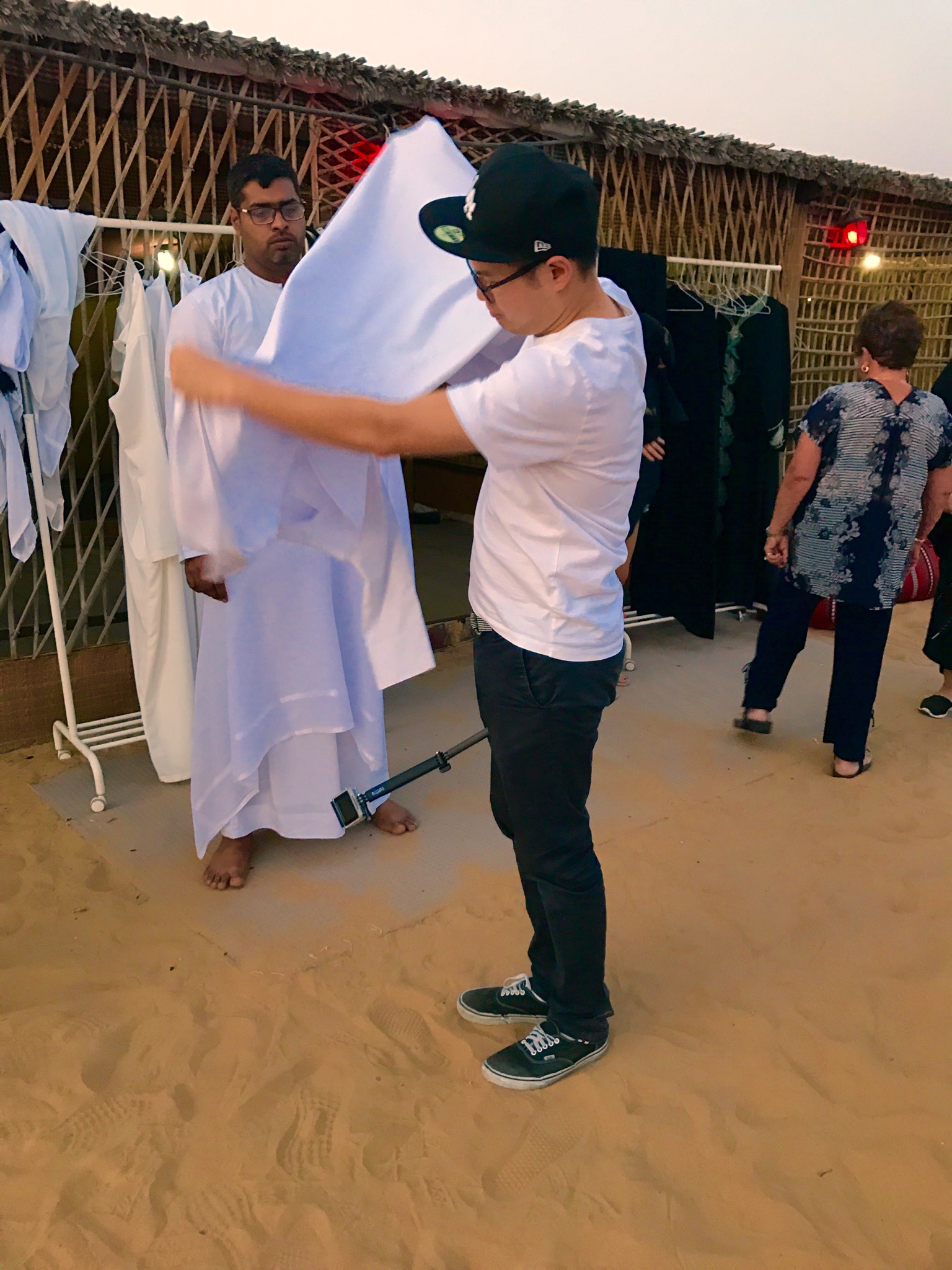 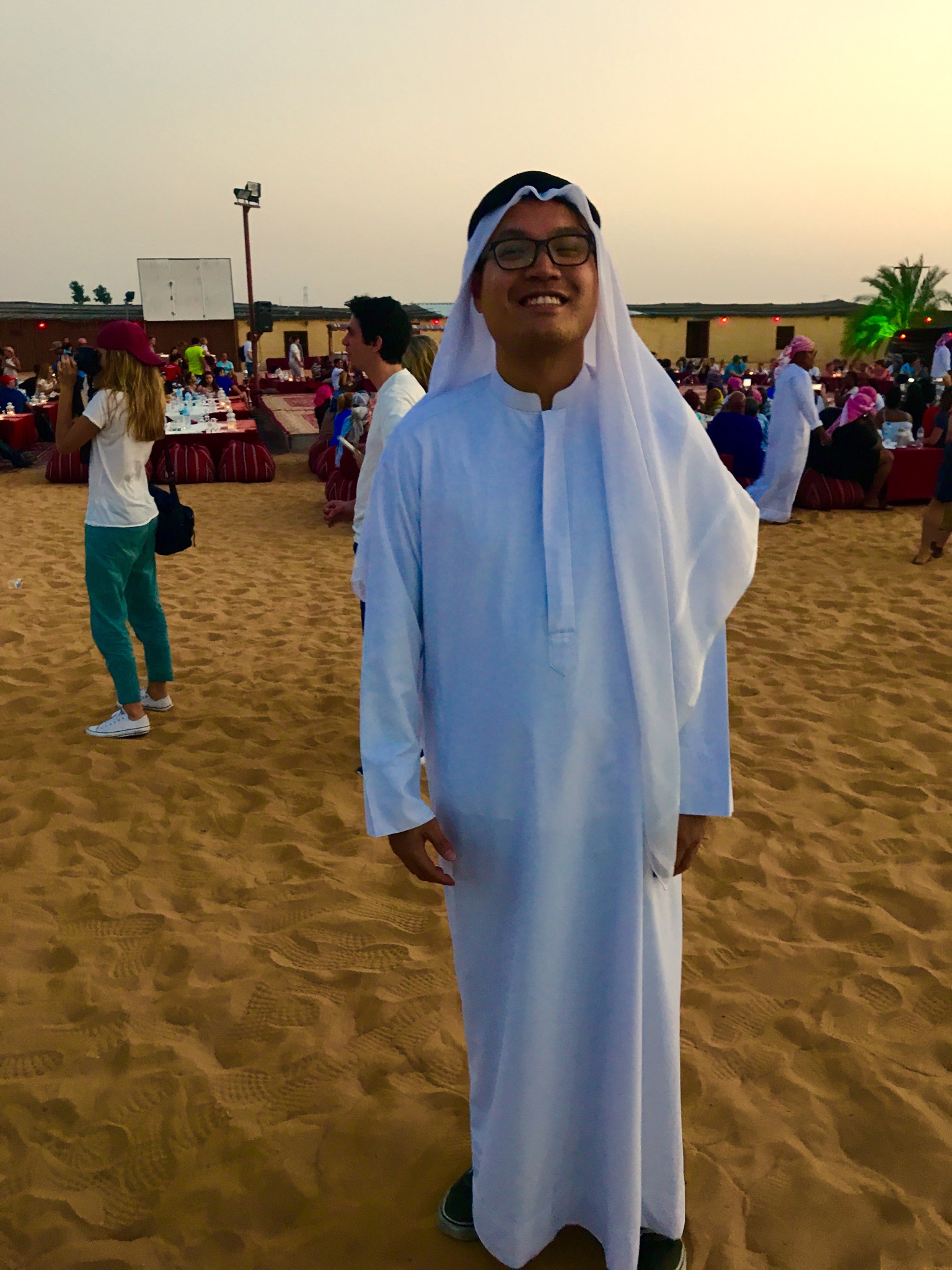 I look so cool. 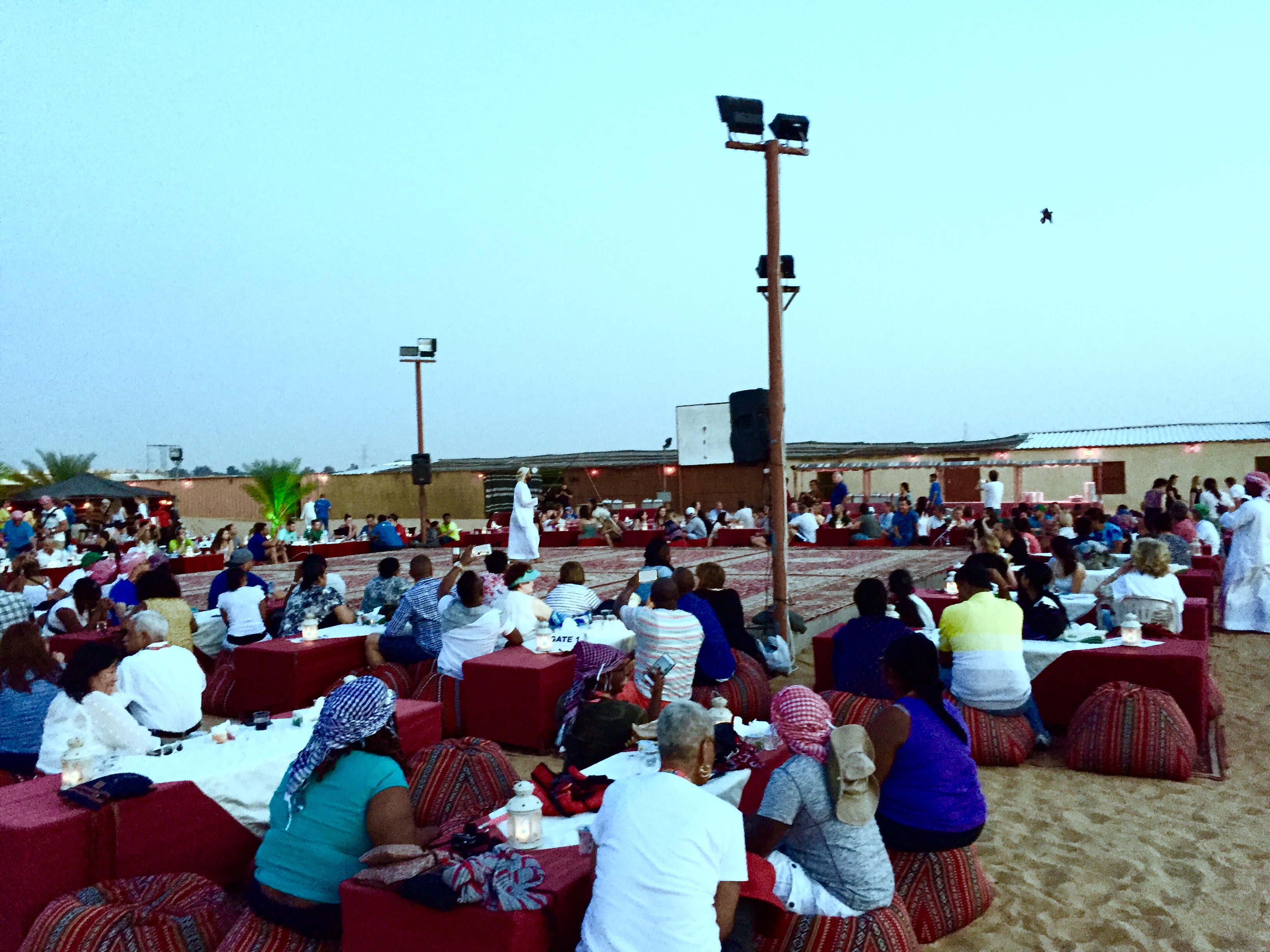 While I was in Saudi Wear the camp decided to show the falcon show. I couldn’t run in this. So I took it off and jogged back to my table.

The show was over by the time I got back.

I want a refund. 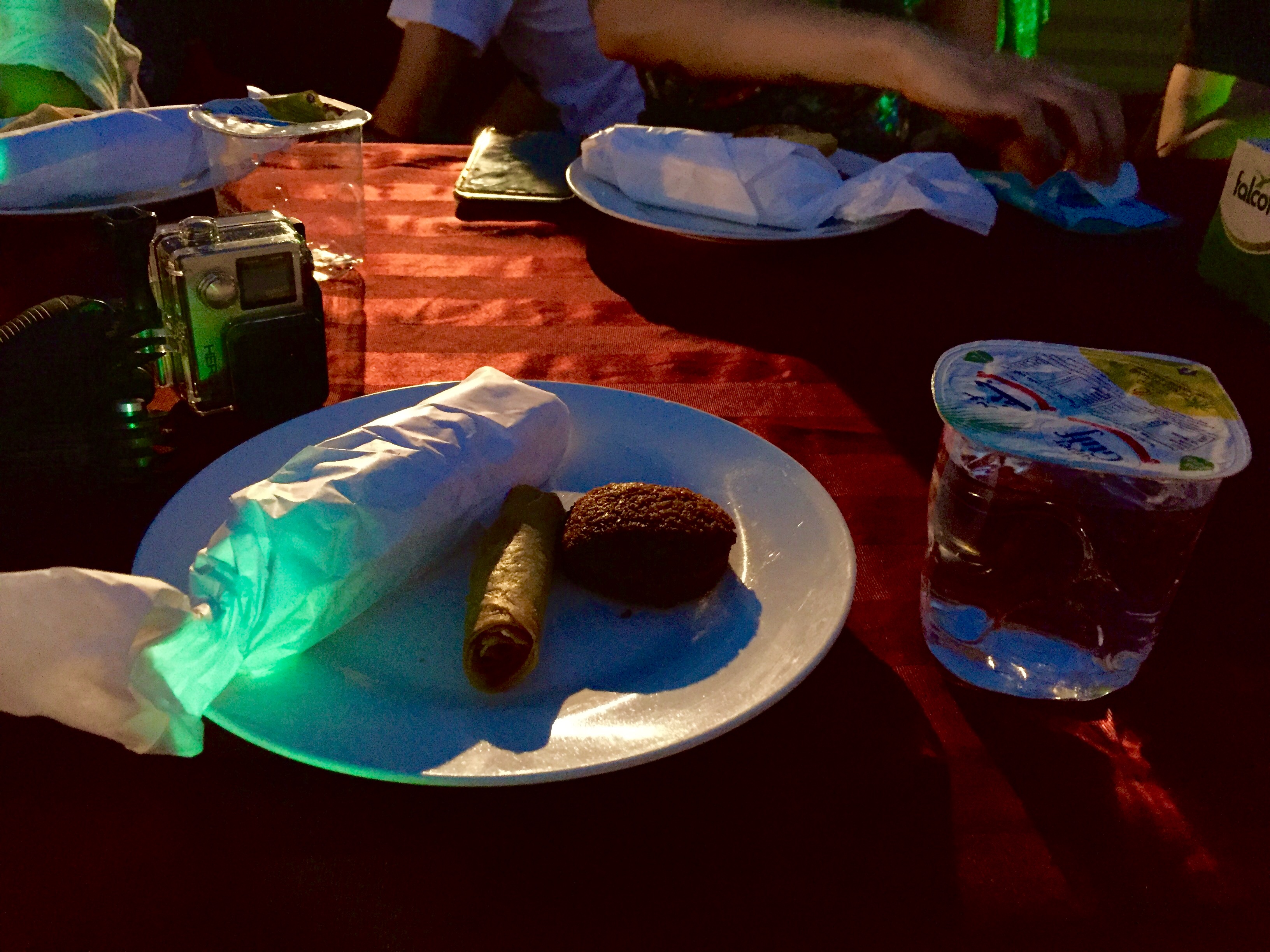 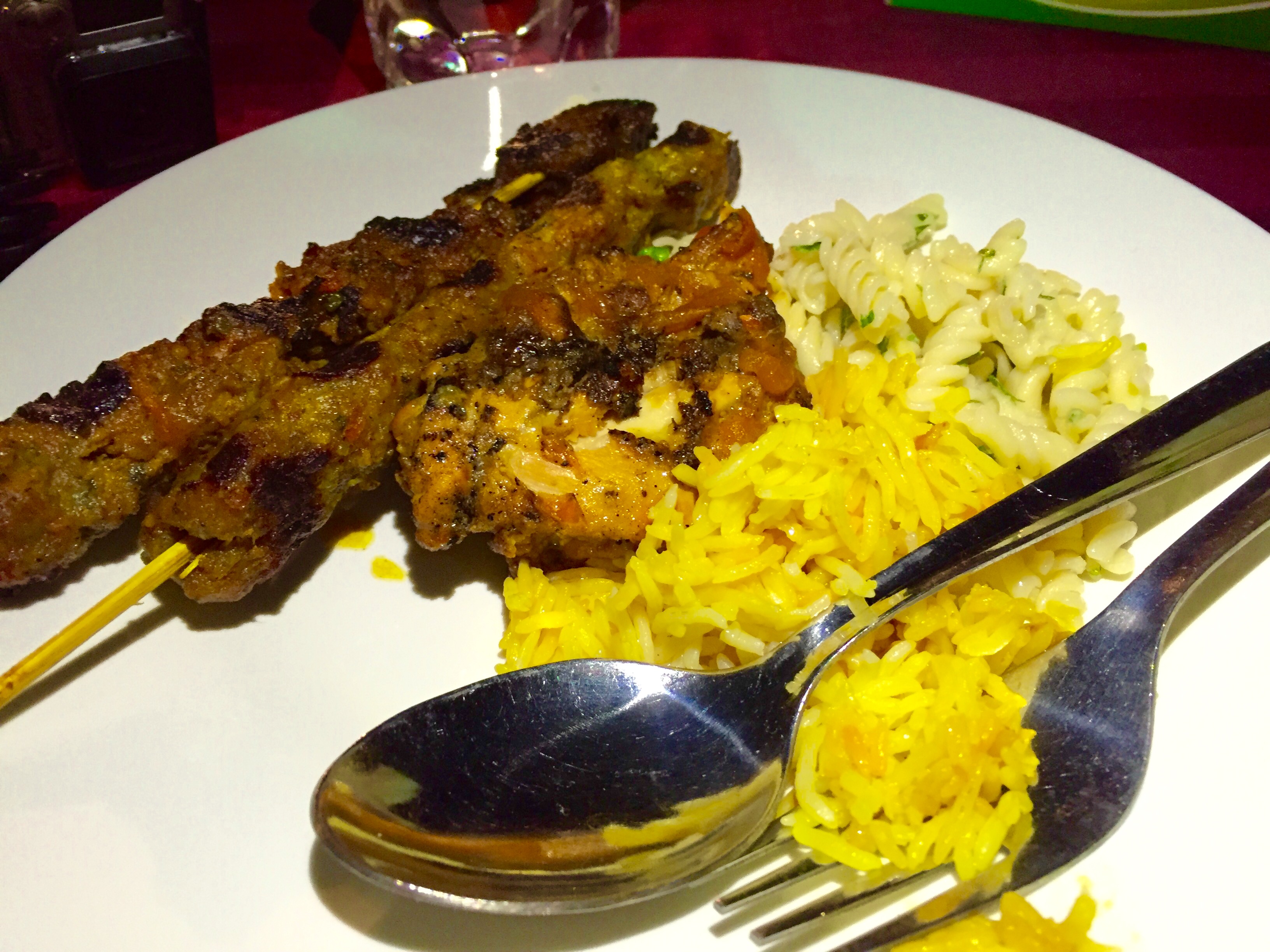 For food, we were initially fed falafels I was like damn this food is shit.

And thennnn the buffet came and all was well. Chicken, Beef, and lamb. Yep. My type of buffet.

Food was alright but it’s a buffet so it’s all good in my life. 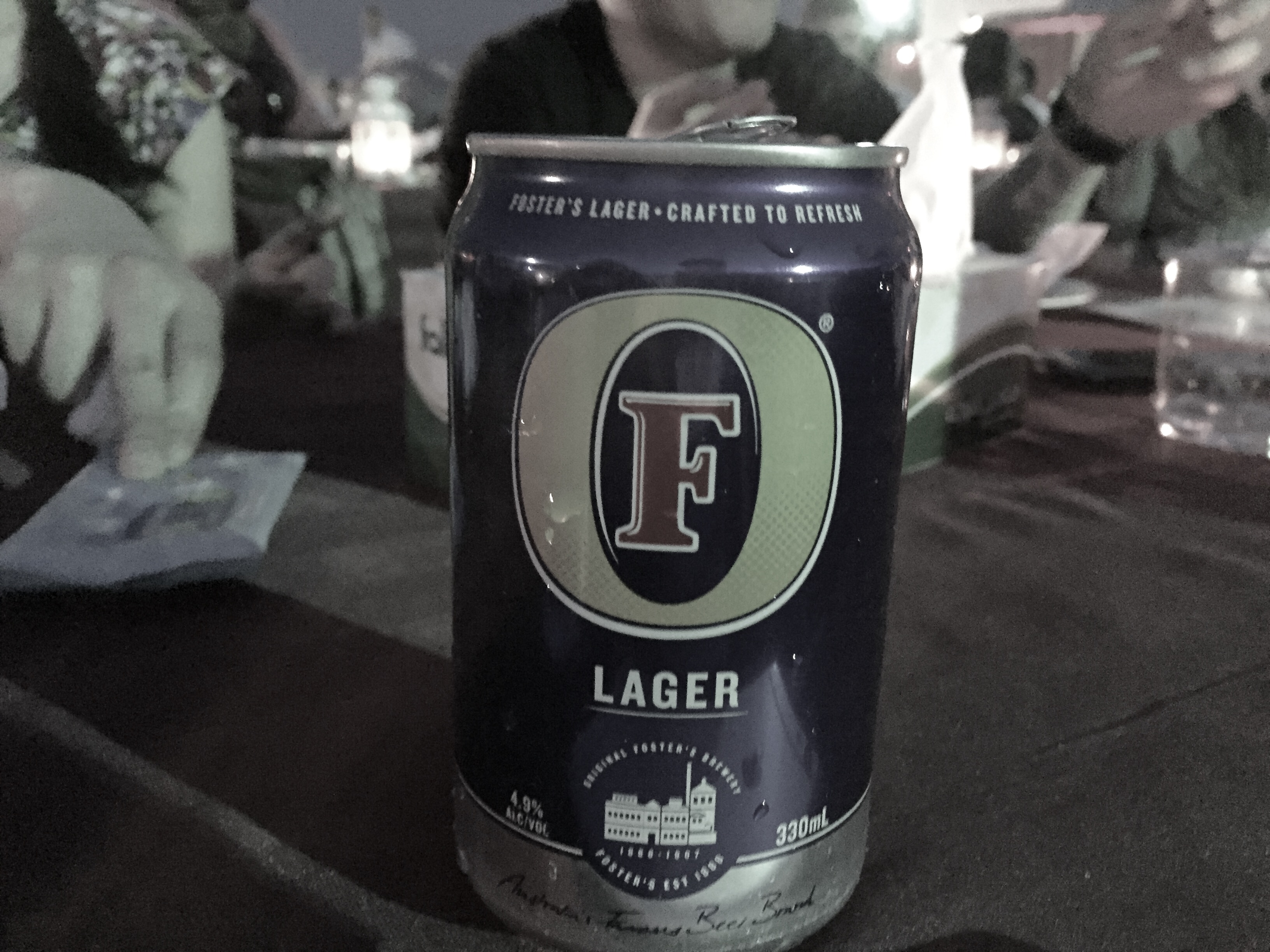 First time drinking in the middle east. Outside of the hotel. Outside of private establishments.

Must say, I feel like a motherf*cking bad ass. 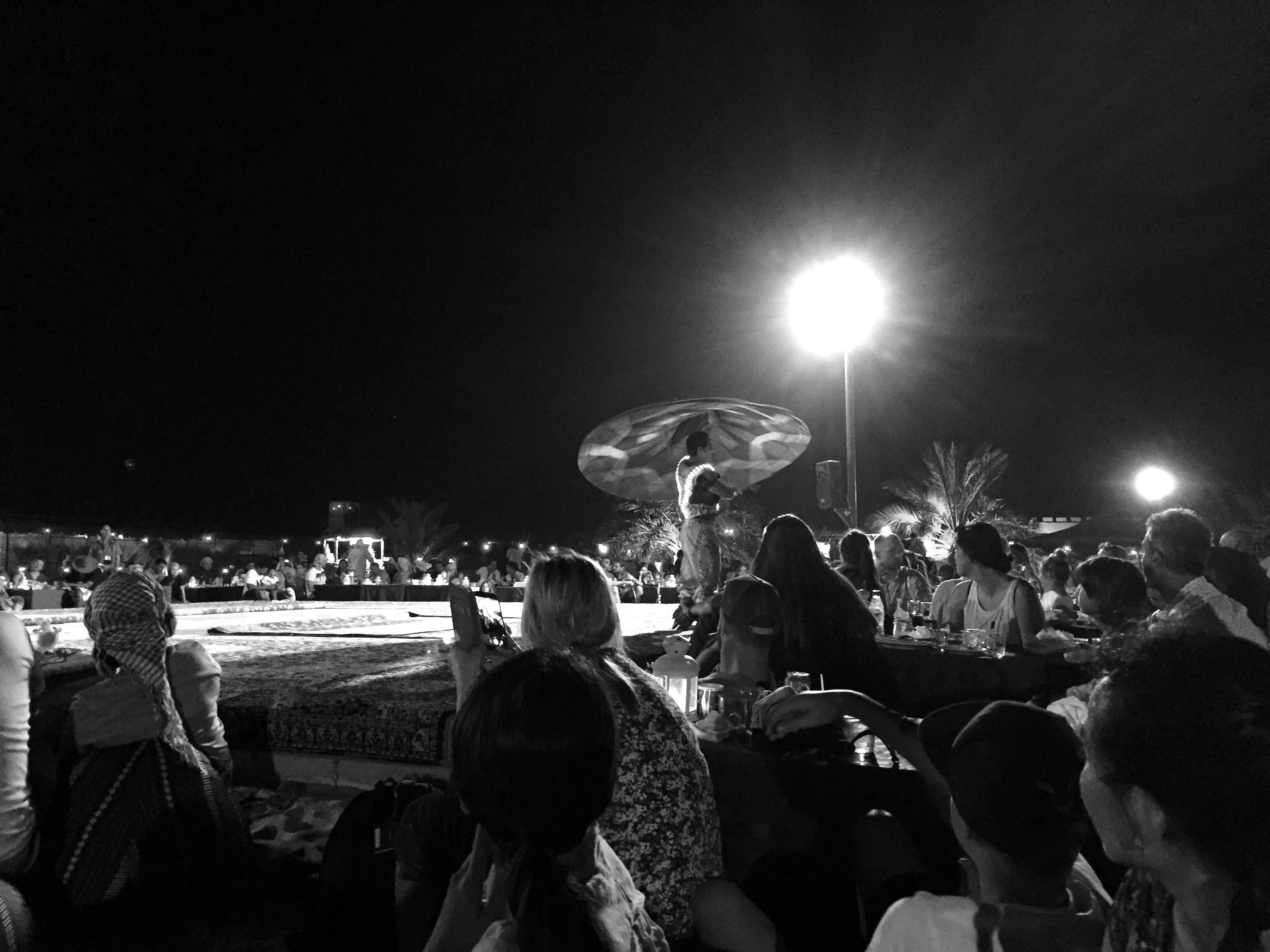 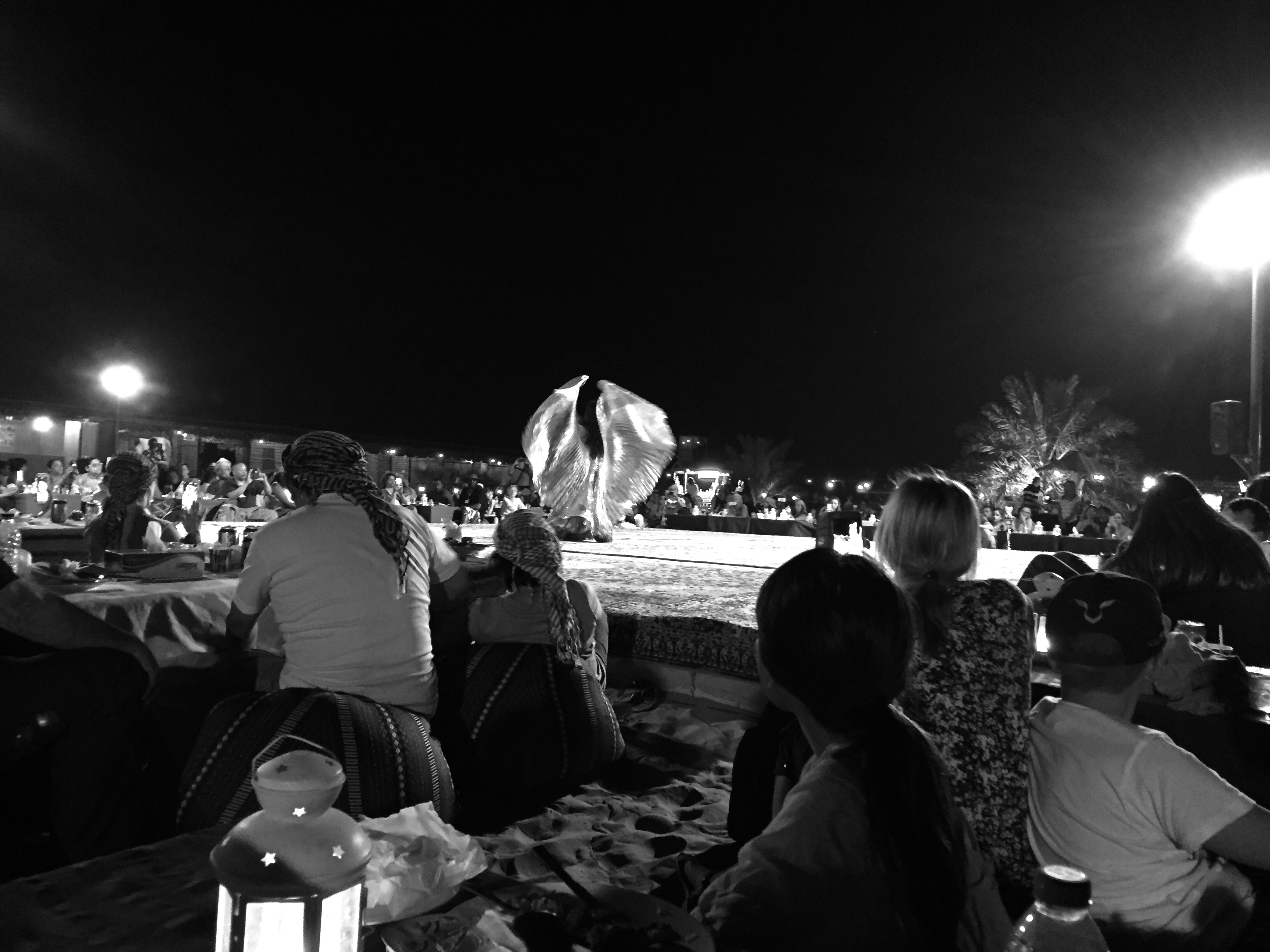 Wow. We also get treated to two different shows?

The girl..she was pretty sexy..isn’t that a big no-no in the middle east? I feel like I might get arrested here…but it was indeed…enjoyable.

I need to go to the desert again. But this time, it will just be me. and maybe a couple of friends.