Welcome to another episode of Munky’s sad attempt at cooking.  Today, I will show you how I cooked this simple meal, creatively titled “Chicken and Soup”.  haha.  Ok, i admit I cheated a bit for this meal.  I was tired from work (we had a company dinner which lasted until 2AM), but determined to follow my schedule I still went to the super market after work. 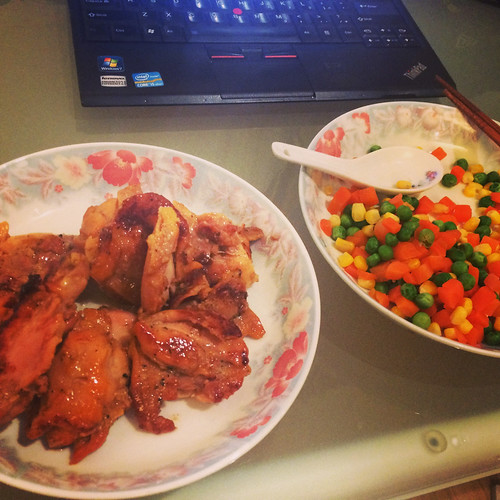 Chicken (that has already been  marinated hahah)

Soup (with the ingredients already pre-packaged) 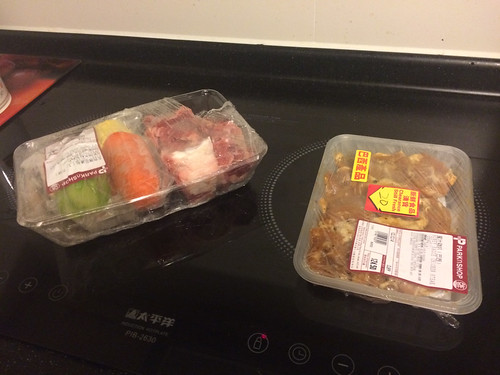 I already had frozen veggies from a previous purchase so I was covered in that area.  The soup was easy to make, since I just had to wait for the water to boil before pouring the ingredients in.  I boiled the soup for about 2.5 hours which was enough as it was already flavorful.  I think next time though I will only fill the pot a little less than 3/4 of the way through.  Just a personal preference.

The frozen veggies was super easy too, just needed to put it into boiling water.  Added a bit of salt at the end.  Awesome.

Finally, the chicken.  I am a super newb in that I have never cooked chicken before.  Unless it was hotpot.  So, putting on my brave face I heated the pan and put the chicken in.  Did some research online and it seems like if you cook the chicken for about 12 minutes you should be fine.

So I did that, but at the end of the 12 minutes the chicken was still a bit raw so I turned the heat down a bit (to medium), and began to use a tip from my co worker – poke the chicken.  Or if all fails, cut it to make sure it’s thoroughly cooked.  I did that, and yes I had a cooked chicken for dinner.  No raw chicken.  I think the entire exercise took me about 15 minutes.

This was really fun!  And delicious! Next step, to marinate the chicken myself =)