As you may know, Adelaide is a major wine producing city.  One of the more famous wine producing regions within Adelaide is the Barossa Valley. Even if you are not big on wine, the drive to the Barossa Valley is breath taking. It takes about 1 hour from the city center to Barossa Valley, and along the way you will see a lot of farm fields. Great for taking pictures!  We were also lucky as the weather was really nice that weekend.  We saw on the news that there was a snow storm the day after we left!! Lucky! 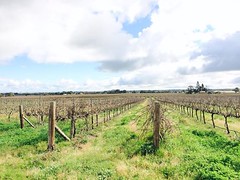 I think what I liked most, was that it was so calm and peaceful. Just listening to the wind blow into the fields, sun shining down on you, with blue skies was like heaven on earth.  I certainly took this for granted when I was in Toronto.  I guess the saying is true, you generally overlook the things you have.

Anyways, took some more photos during the drive to Barossa Valley: 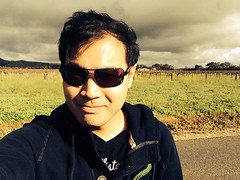 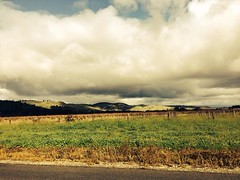 We were able to visit about 3 wineries when we were there.  One of those wineries was Penfolds, which is a well known winery.  Maybe it’s because I am not a wine fanatic, but the wines were expensive!  Being the cheap ass that I am, I didn’t buy any.  Though all the wineries had a tasting section where you can drink to your heart’s content (don’t drink so much if you are driving though).   I mean, the wine was tasty…but being a beer drinker I guess it’s not my cup of tea (Or glass of wine…?? haha)

I was thinking that we would actually get to tour around the winery itself, but it was actually not available to the public (or maybe you have to book in advance).  Instead, we would go to the store section of the winery, where you get taste all the wine and of course purchase any of the wines that you like!!

This place will be heaven for all you wine lovers =)